Lola - the hand-printed hanger. A Thrift-ola original
« Poodle Planter? No, it’s a Pen Pot!
A Gal can’t be Thrifty all the Time! »

I'm just back from a whirlwind 7 days in my favourite city New York. Here's what I got up to in no particular order... 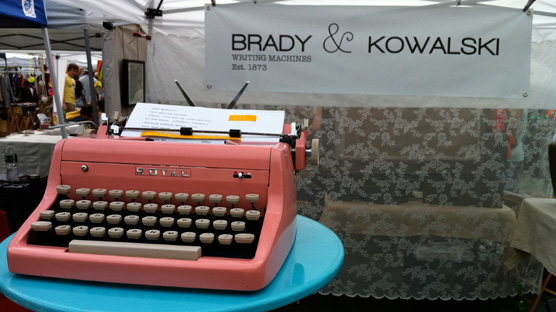 I’ve been following the Brooklyn Flea on Twitter and wot not for a while so although we were heading out to spend the weekend in Long Island a quick pit stop was made in Fort Greene in Brooklyn for Saturday’s flea market. They also run in Williamsburg on a Sunday and other events throughout the year. What a treasure trove of homewares, clothing, accessories and bric-a-brac. The best part? Seek out the streets around the flea where locals have ‘stoop’ sales in their front yard. That’s where I picked up the best bargains! 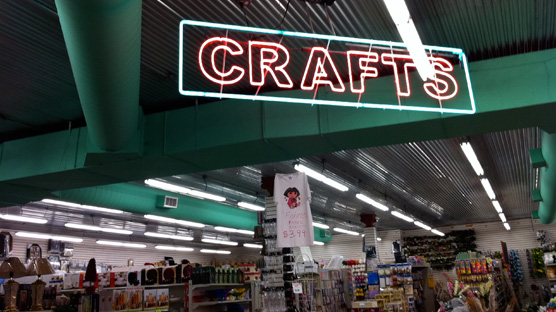 Thrift and craft go hand in hand at Thrift-ola towers. So stumbling upon this huge craft superstore in Queens was not only good because the air con saved us from a melting midday heat but it was a fairyland of makers gold. A few doors down was a random opticians with some pairs of vintage sunglasses in the window, they were $20 each but I bought 8 pairs and got the price down to $8 dollars each. Be sure to haggle with a smile on your face in New York and it’s amazing the deals you can cut! 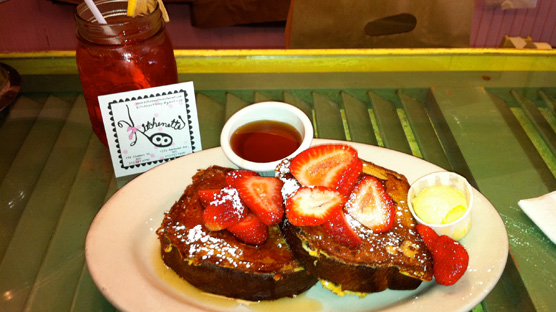 I don’t really brunch in London, it seems somewhat decadent, but really when you think about it it’s one meal instead of two. That’s thrifty, right? Anyho, we brunched *a lot* in New York and this was one of my favourite snackettes in Kitchenette in TriBeCa. I had fresh strawberries and maple syrup atop brioche french toast and a Shirley Temple drink in a jam jar. 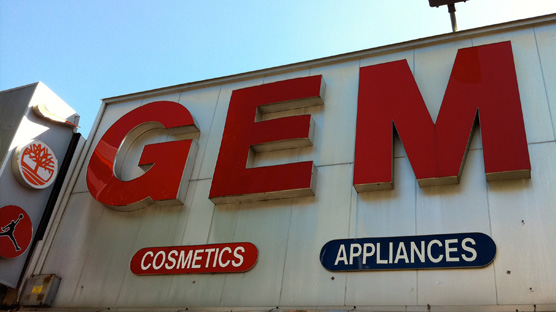 I love a pound store and I think we found the king daddio of pound stores in Queens called Gem. My friend scooped up plastic fruit fridge magnets and piles of nail varnishes and I stocked up on the classic Composition note books for just 88c each. 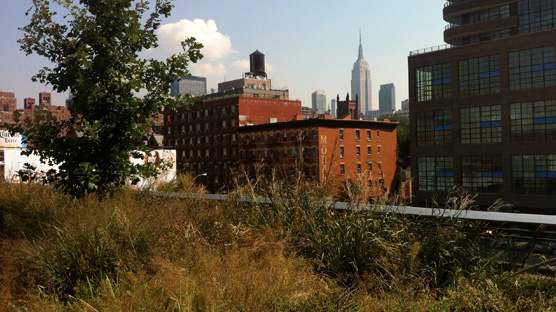 Luckily, my friend and I have both been to New York a few times before so didn’t feel we needed to do the tourist attractions apart from the recently opened Highline. It was a disused railtrack that when threatened with being demolished a couple of locals stepped in and campaigned to save it. It’s since been superbly landscaped and is free to walk along with stunning views of the city. We thought it would make a great date place ending up at the Standard Hotel for cocktails. 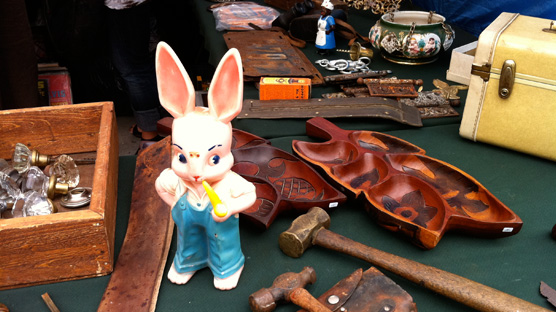 I’ve watched many an old gangster film set in Hell’s Kitchen so finding out there was a Hell’s Kitchen flea market proved too good an opportunity to miss. Of course, being in Manhattan, near Times Square no less, it was quite expensive and a bit picked over but I still managed to pick up two gorgeous vintage hats for $5 each. 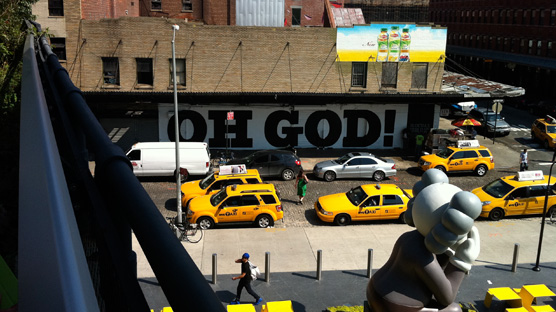 As a thrifty person I often ride my bicycle when out and about in East London or take the bus with my Oyster card. We had so much to do in New York and tended to find the Subway super confusing (uptown, downtown – we went round and round!) that we ended up hopping in cabs. But guess what! Cabs are much, much cheaper than in London and when with a group o’gals only cost a few dollars to skip from place to place. I shouldn’t get too used to it though! 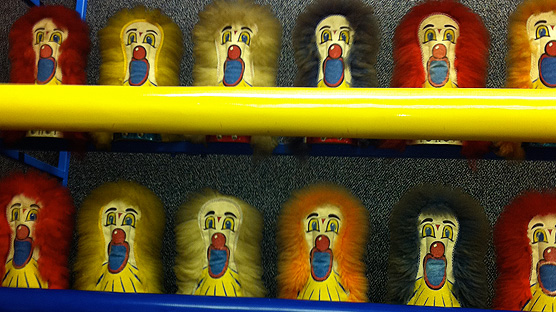 When you hit the terminal at JFK make your first purchase a copy of Time Out! We only bought it with one day to go and found out we’d missed the Puppy Hugging Parade. Believe it. We had done a little internet research beforehand though and found out that Fashion’s Night Out was occuring the evening we arrived. So, dumping bags straight in the hotel we headed out to a Mexican Village Fete Block Party (yeeeeeah!) held by Opening Ceremony. For $2 I successfully knocked down 3 of these spooky clowns pictured above to win a super hot OC bag. Had we not been up for nearly 24 hours we’d have surely skipped over to the Teen Vogue block party and grabbed a free swag bag from the Patricia Field party. 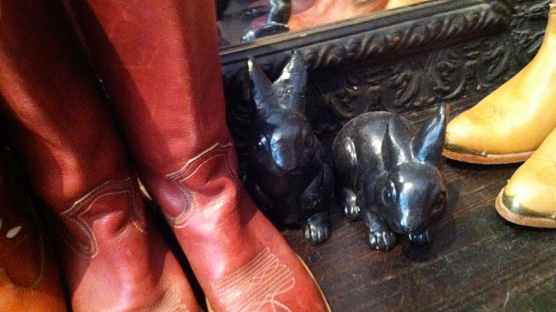 ‘Vintage’ shops can be quite annoying when a polyester 80s dress is £50, but I’ll still always head into a newly found vintage store just in case. Rabbits in Williamsburg was an absolute joy! We chatted with the Japanese store owner for ages as she told us tales of finding whole boxes of unworn high waisted original 70s Wrangler jeans in rag mills in Canada. She’s got a great eye for quality vintage threads and y’know I don’t mind paying a bit more than jumble sale prices for a fantastic find. I treated myself to a Betsey Johnson romper and an oversized denim jacket customised with oodles of ace patches inc. an owl, a banana, glow in the dark clowns and more. 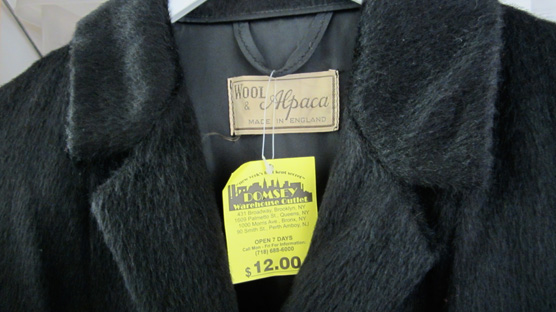 You can’t go to the US without visiting a proper thrift store, they’re like charity shops but set in giant superstores. New York isn’t the best place for them but we did discover Domsey’s Warehouse Outlet in Williamsburg and they also have other locations. Like the biggest rummage sale in your wildest dreams, it is though a hit and miss endeavour. Lady Luck was smiling down on me though when I found what I’m sure will be my Winter wardrobe staple for many years to come. Yes ladies, an alpaca wool 1950s winter coat for just 12 little dollars. 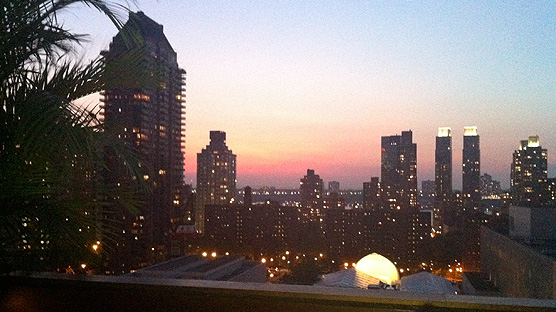 Drinking cocktails in the roof top bar in the Empire Hotel

And one more for luck… it was New York Fashion Week whilst we were in town and a tip off took us to the rooftop of the Empire hotel for free cocktails at a fashion soiree. It was so swanky and I giggled to myself at the fashion nonsense taking place but hey-ho the views as the sunset over Manhattan were truly stunning!

A website you might also find useful is Brokelyn and if you’re looking for an affordable place to stay try Air BNB. Have fun!